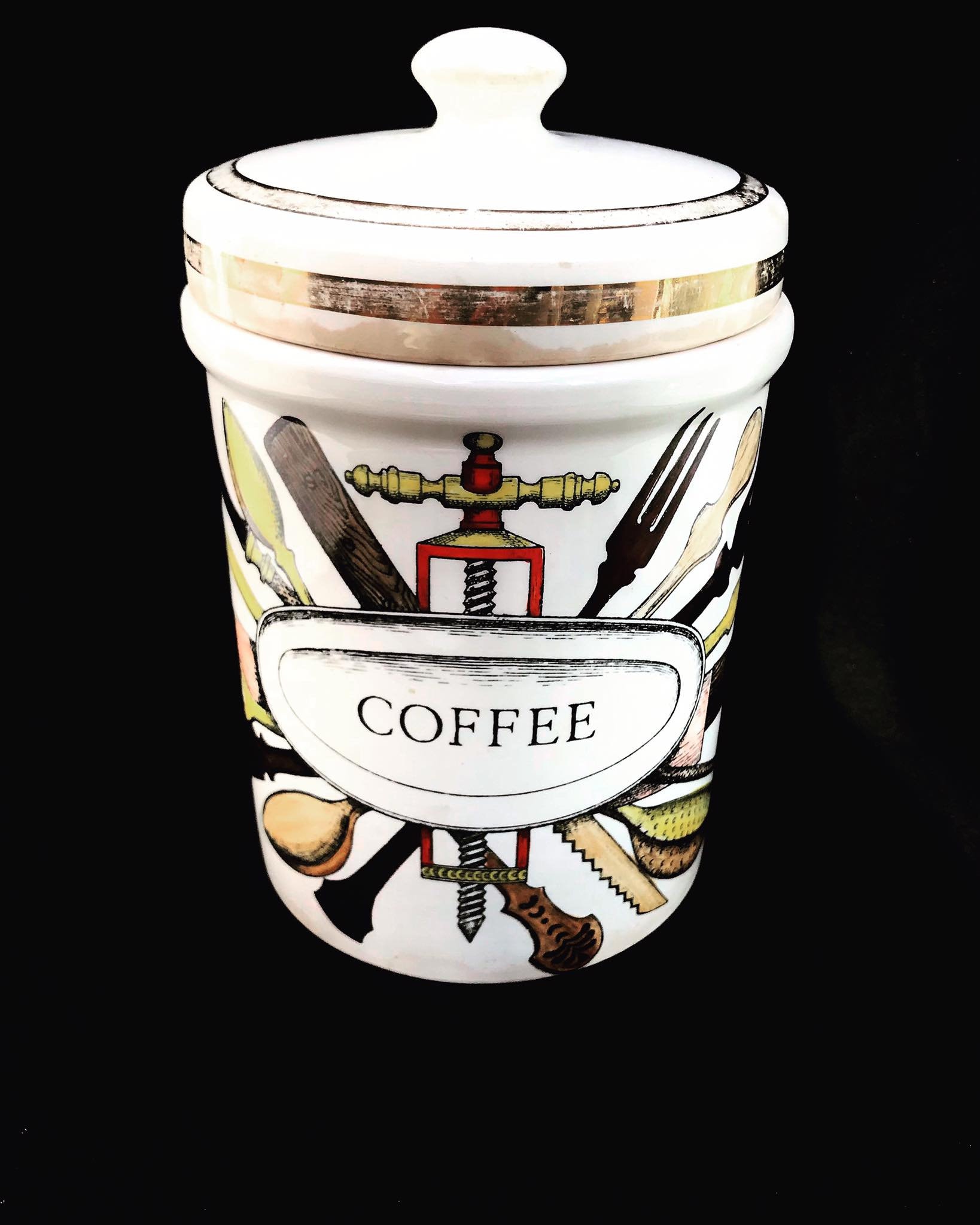 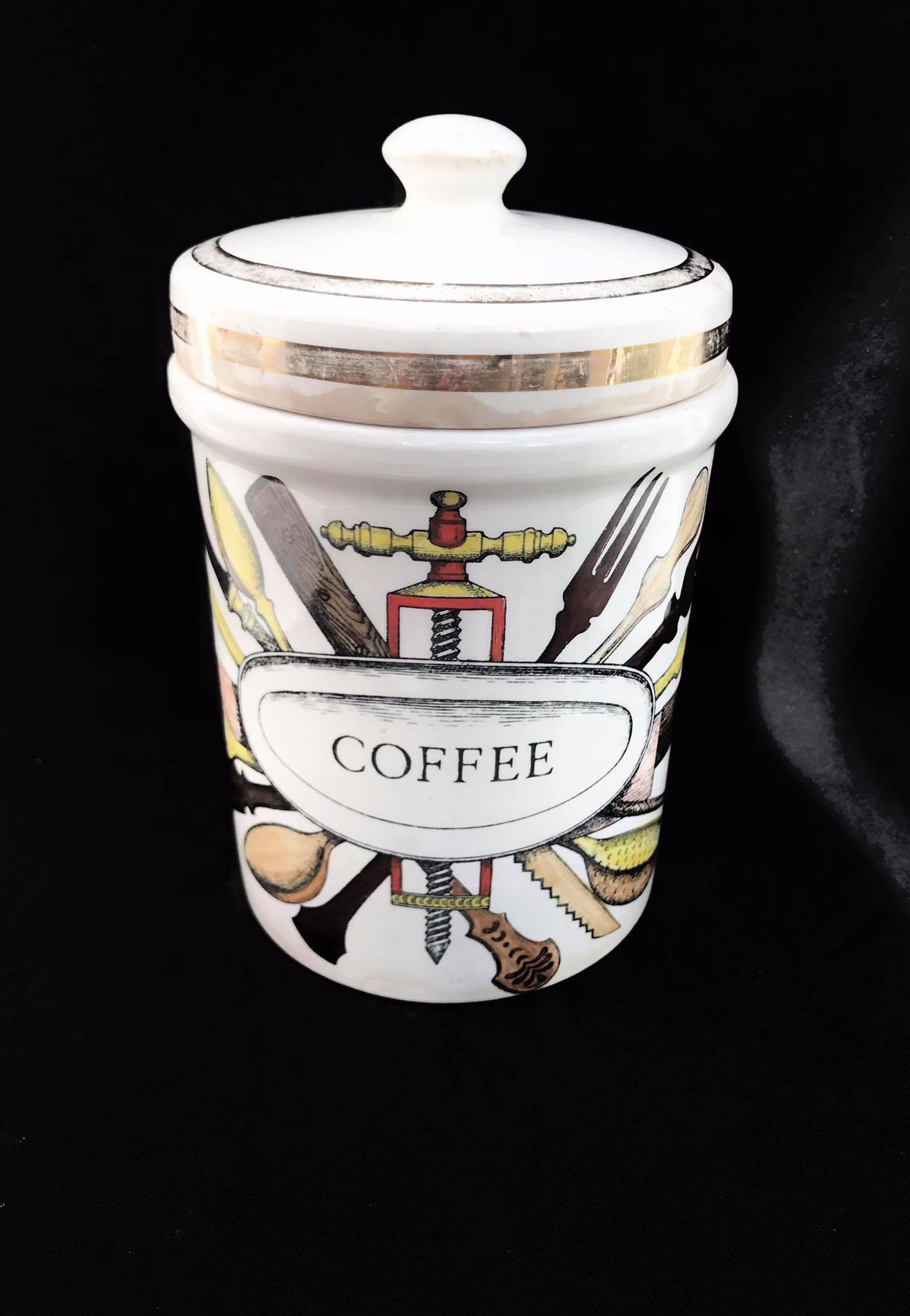 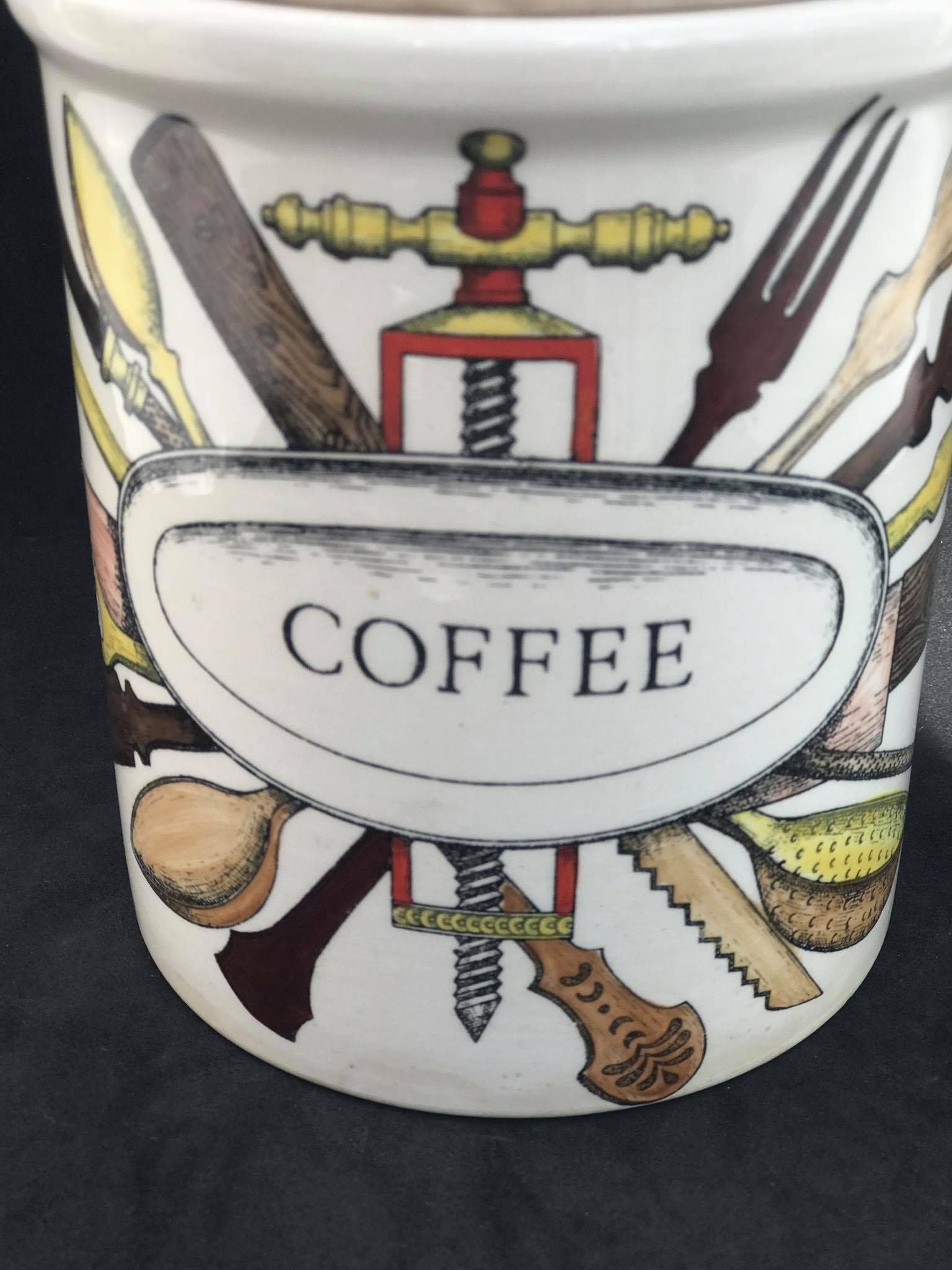 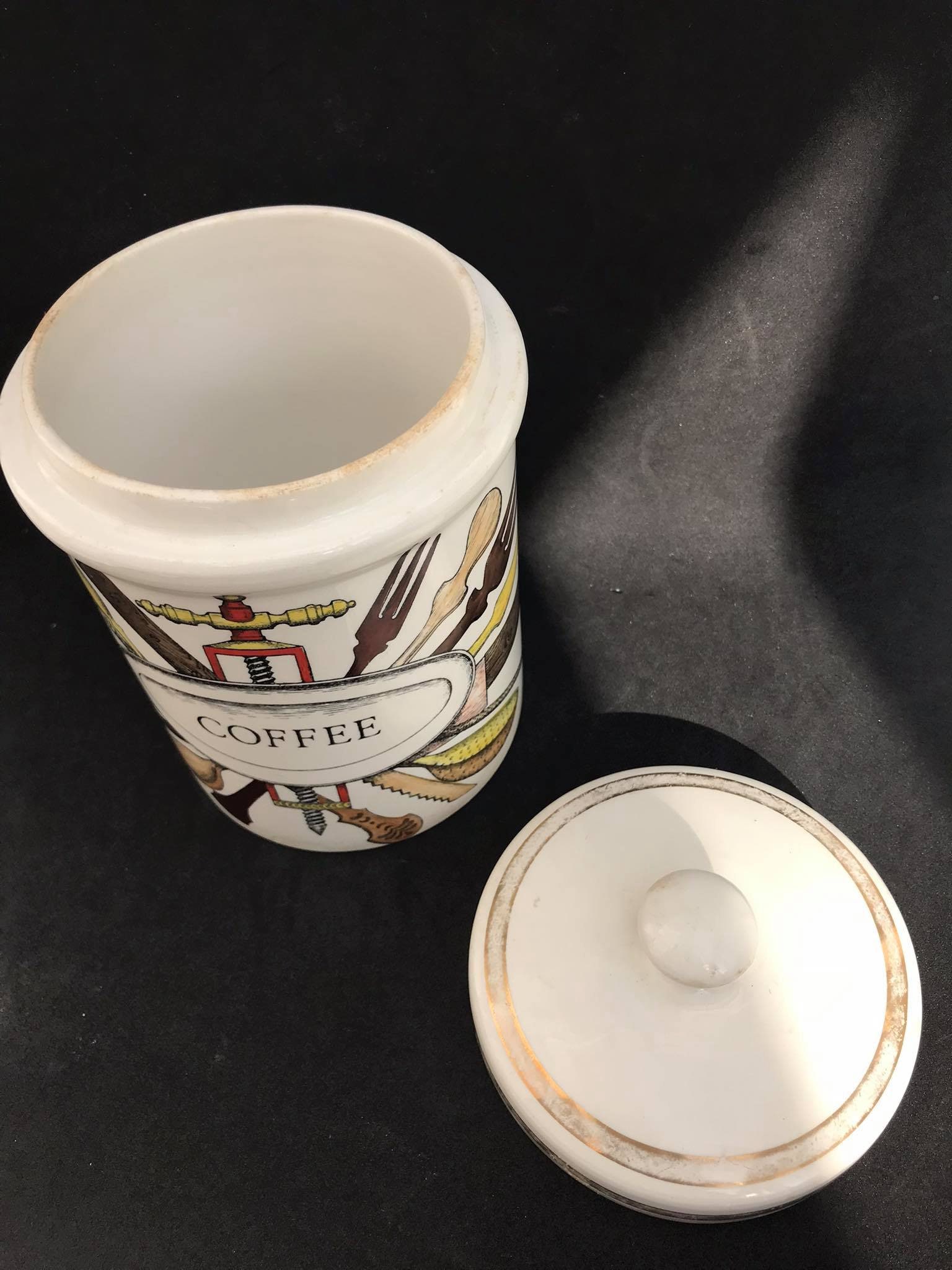 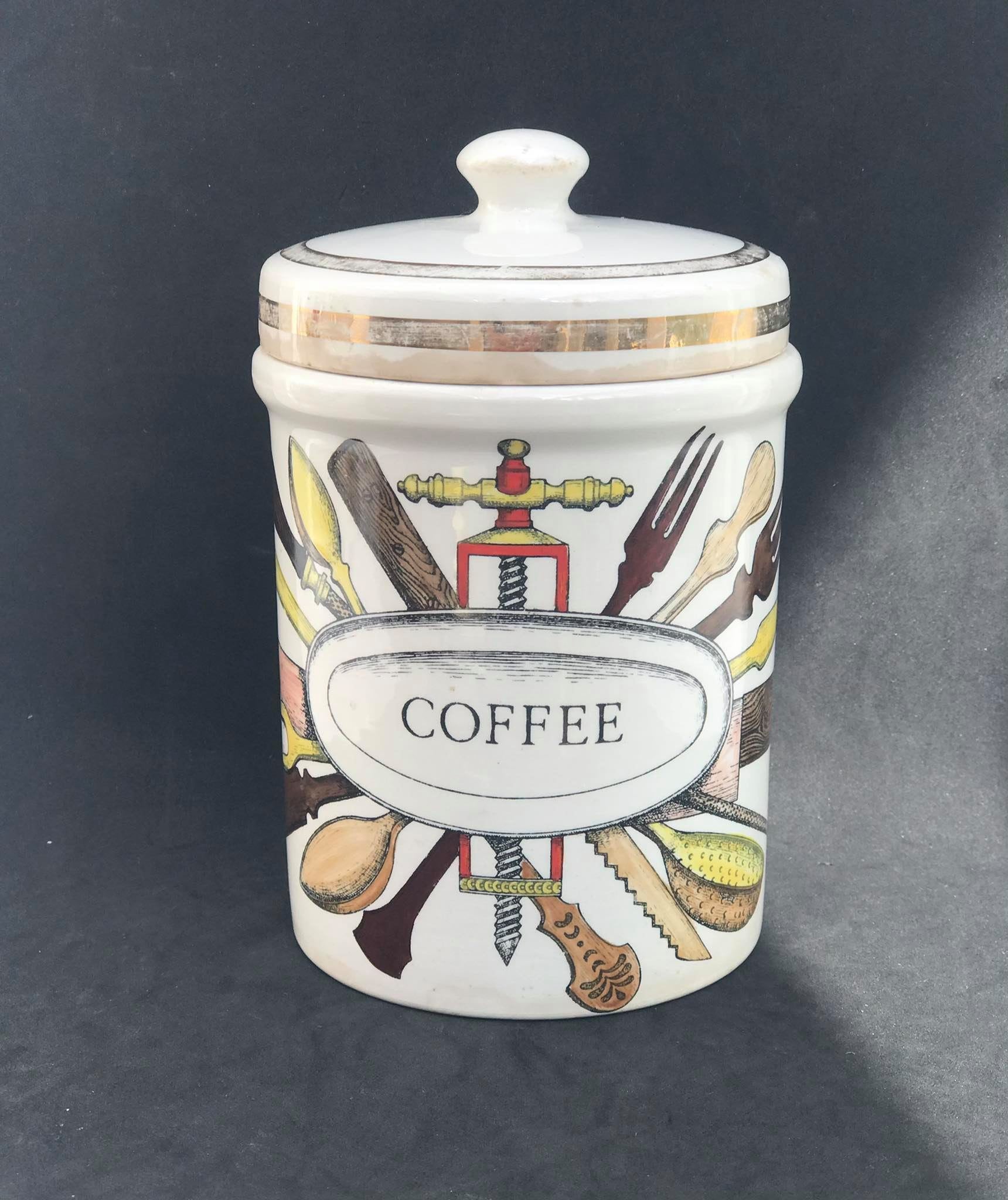 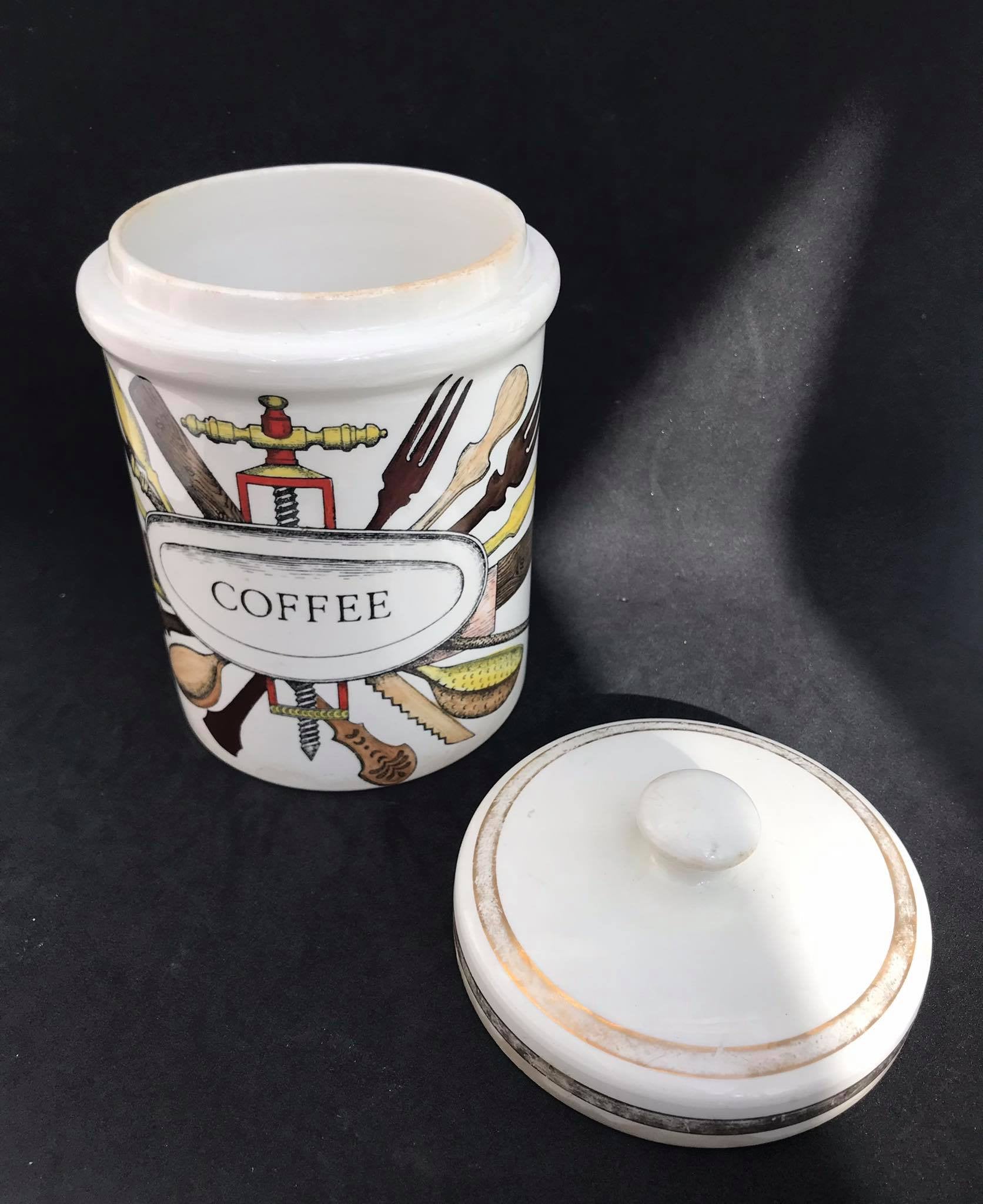 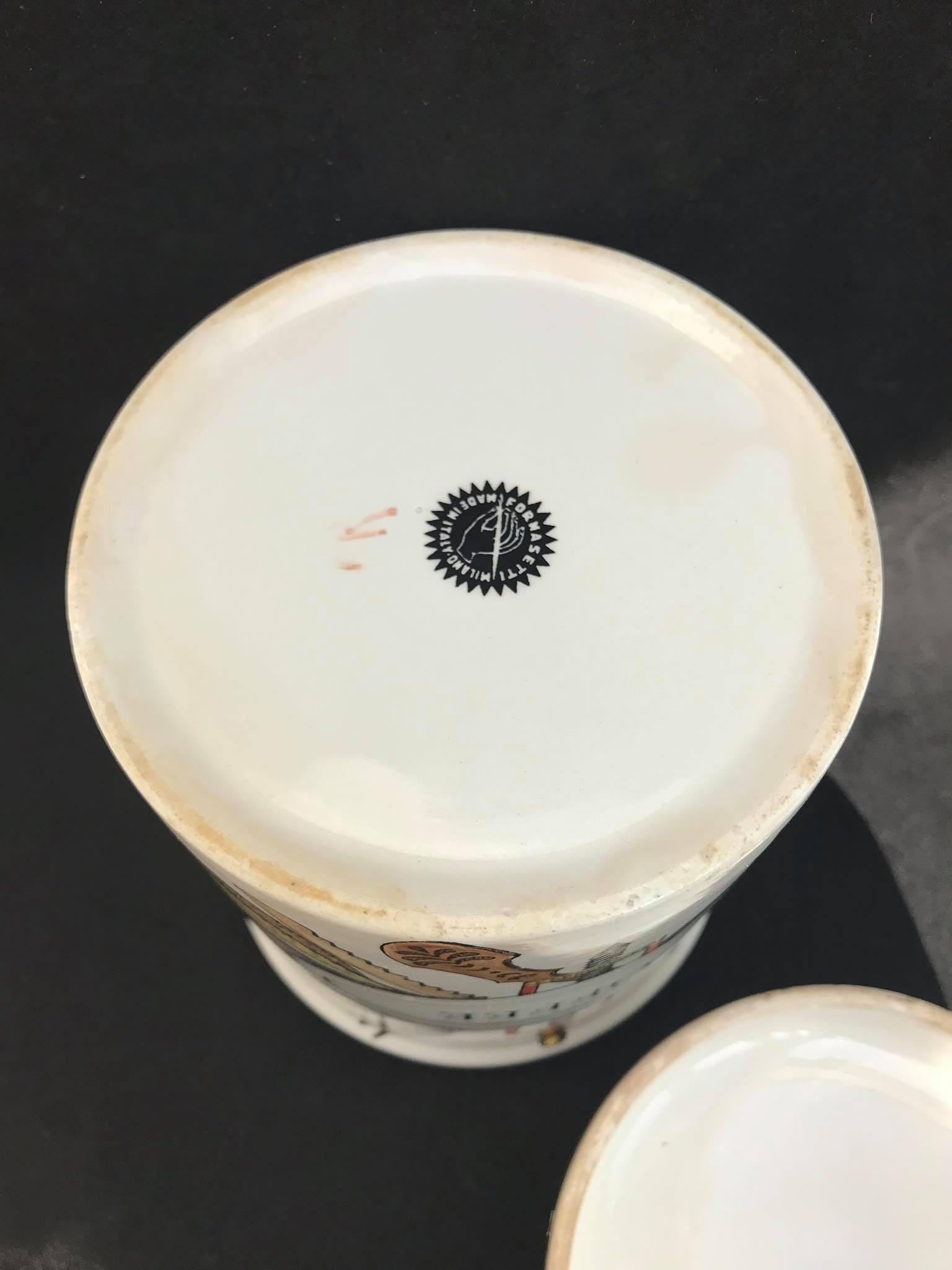 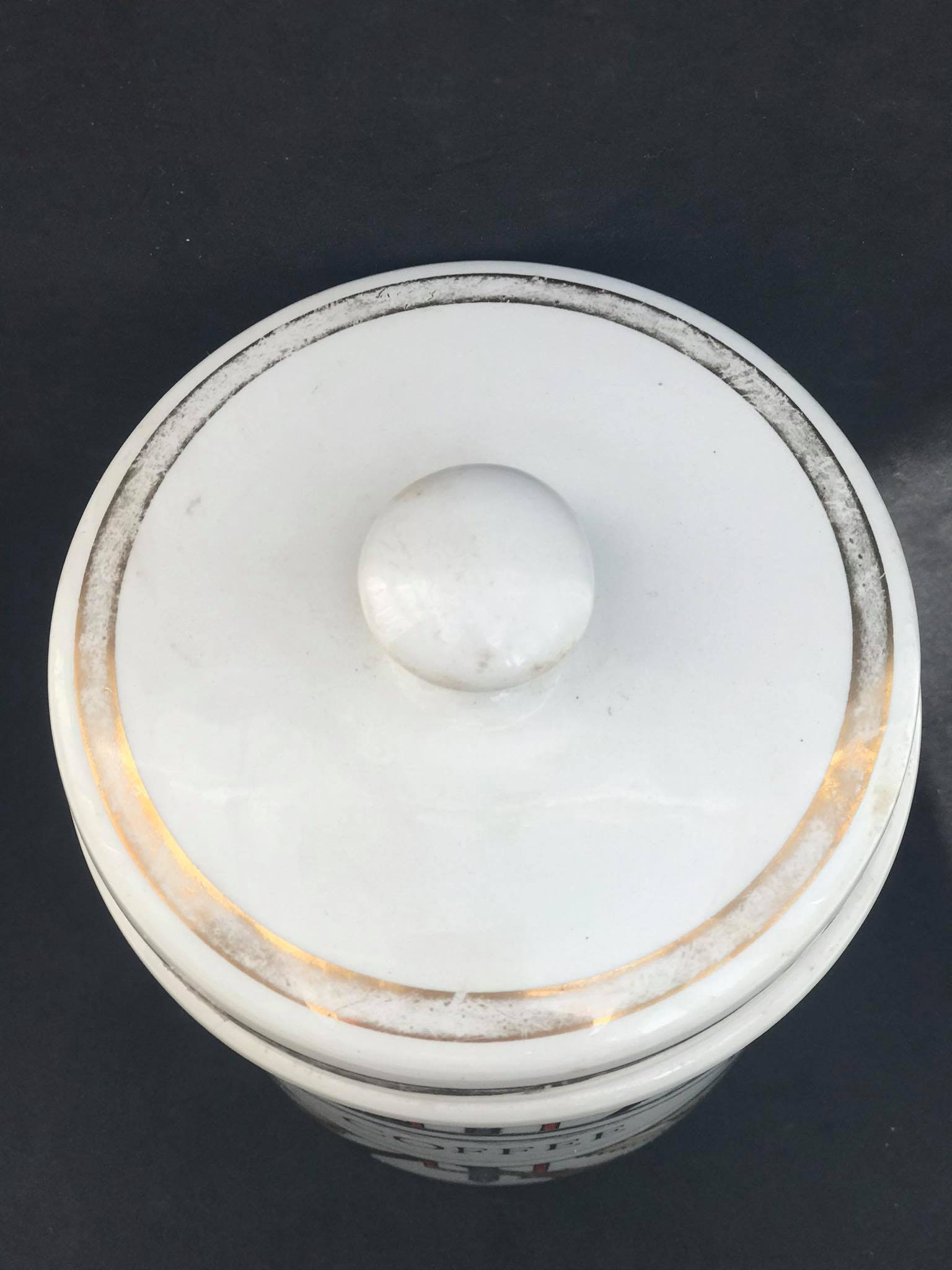 Magnificent Autentic Fornasetti Original Large Jar Coffee Canister Mid Century 1957 with Golden Trim and marked on bottom.
An exquisite kitchen Decor from Italian design, ornament Gift for couple.
Original Marked on bottom Large Coffee jar designed by Piero Fornasetti (1913-1988). Ceramic with polychrome ornaments depicting kitchen tools of different shapes and colors. Brand of the manufacture at the bottom.
Manufactured in Milan, Italy, 1950s.
Very good condition no chips or cracks. Some loss of golden on top, some decoloration of ceramic on top rim producing some stains for aging ceramic, please look at pictures. Wear consistent with age and use.

Fornasetti Milano, made in Italy, one canister, some small amount of age, and gold fade, no chips or cracks.
A porcelain canister by the prestigious artist Piero Fornasetti made in 1950s. Ceramic jar for use as beautiful kitchen accessory. Marked Fornasetti Milano (Maker)

Piero Fornasetti worked in Milan applying his designs to a range of decorative objects from 1935 until his death in 1988.

Condition
Very Good with no chips or crack but wear consistent with age and use. With age appropriate wear and rubbing of the gilt on top, loss of gold showed in pictures and this fact is reflected on price. SOLD AS IS.

Piero Fornasetti was born in 1913 and from the time he was twenty-two until his death in 1988, he lived and worked in Milan applying his designs (gold trim and decals) to a range of decorative objects.


In applying gold trim and decals to an industrial object, Fornasetti was challenging the notion that form follows function but, instead, form or, in this case, a decoration can be added to an object to create "varying degrees of irony, wit and tension" making people rethink the way they looked at the world
In the 1980s, his work enjoyed popularity among both consumers and designers.

"To make the decal, a screen of the desired image is created. This is a process much like making a photograph from a negative (Healey, p. 27). The screen is then used to print the image on a special piece of paper, which, once dry is applied to the ceramic object and fired.
Born in 1913, Fornasetti first garnered popular success through his collaborations with Gio Ponti, who provided the decorator with furnishings on which to apply his neo-classically minded aesthetic, resulting in pieces that exhibited illusionistic spaces that heavily referenced Italian visual culture. Later in his career, Fornasetti’s artistic style became more Surrealist and fanciful, with motifs often featuring animals and the faces of the sun and moon. Perhaps his most popular and recognized motif was that of opera singer Lina Cavalieri, which he used as a recurring motif in a series of 350 plates that feature her likeness in whimsical, increasingly Surrealist compositions"