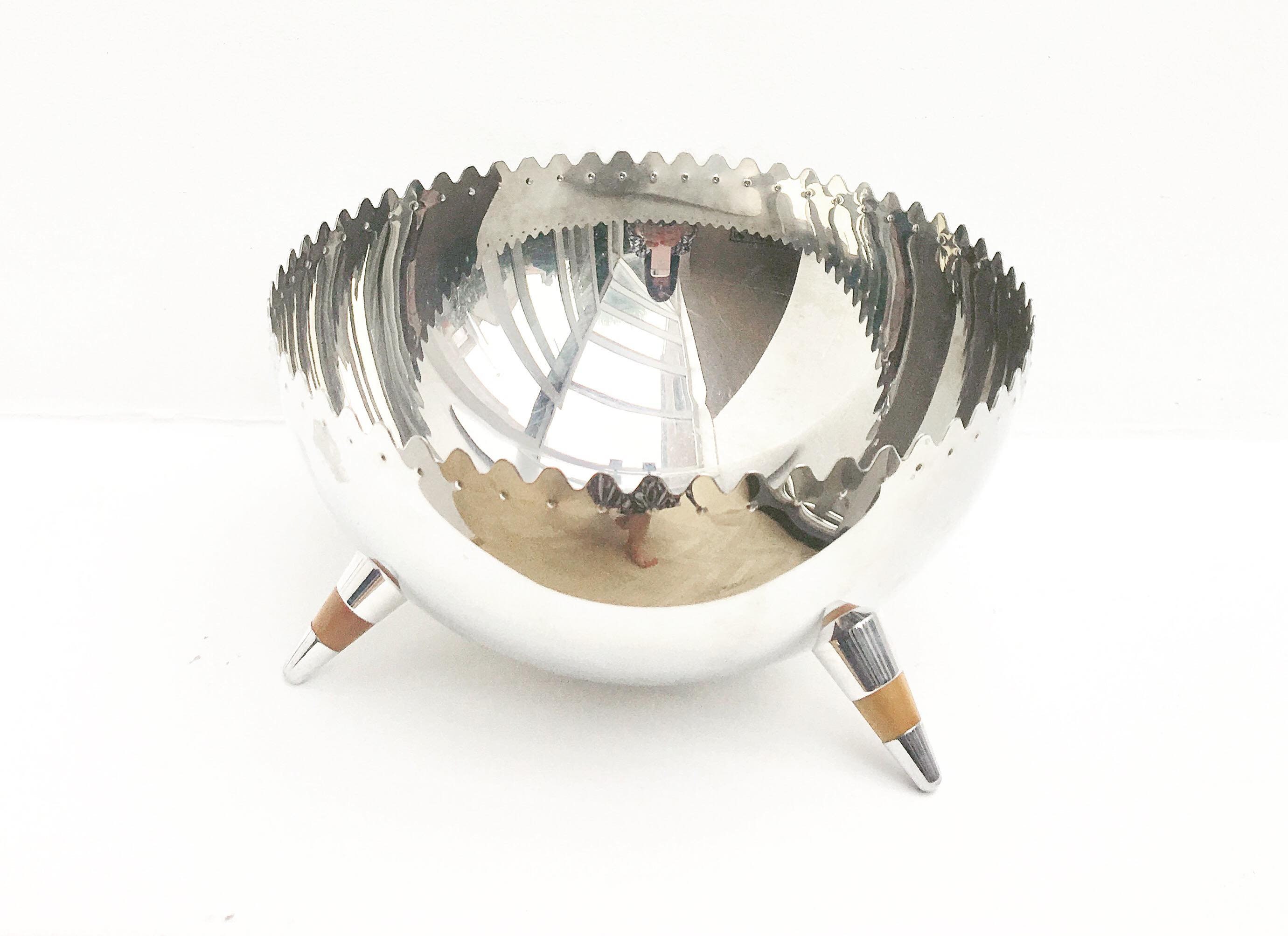 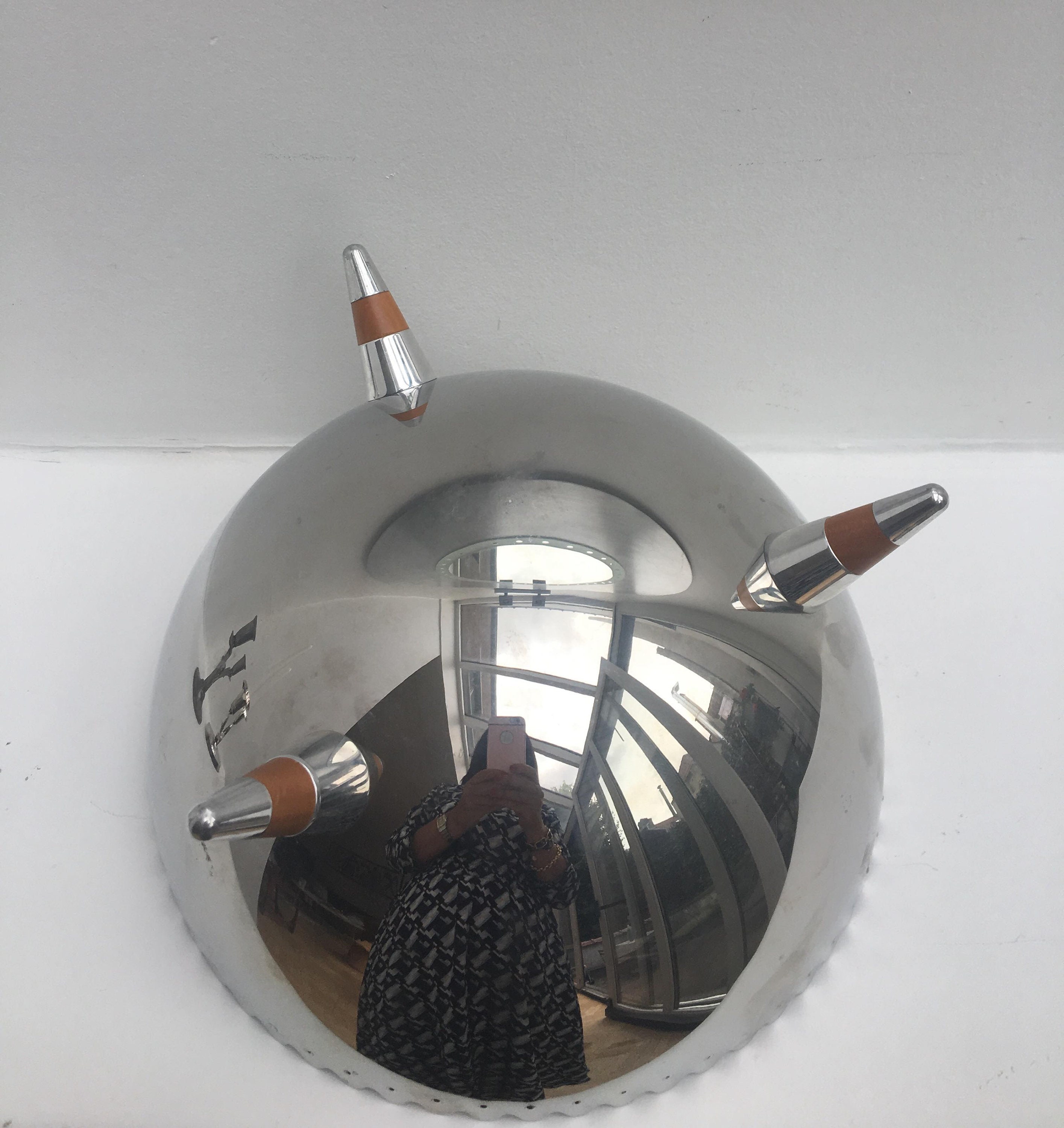 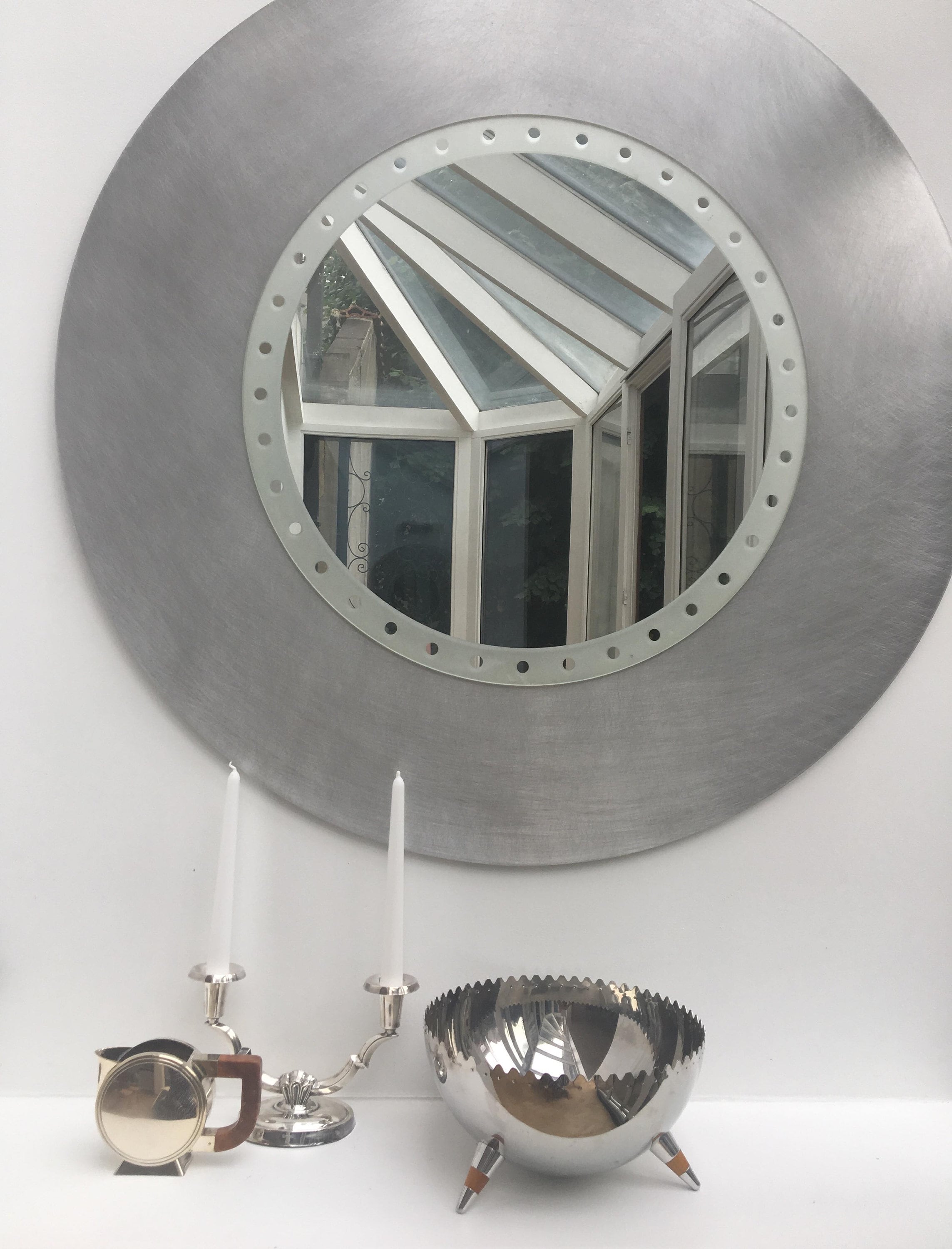 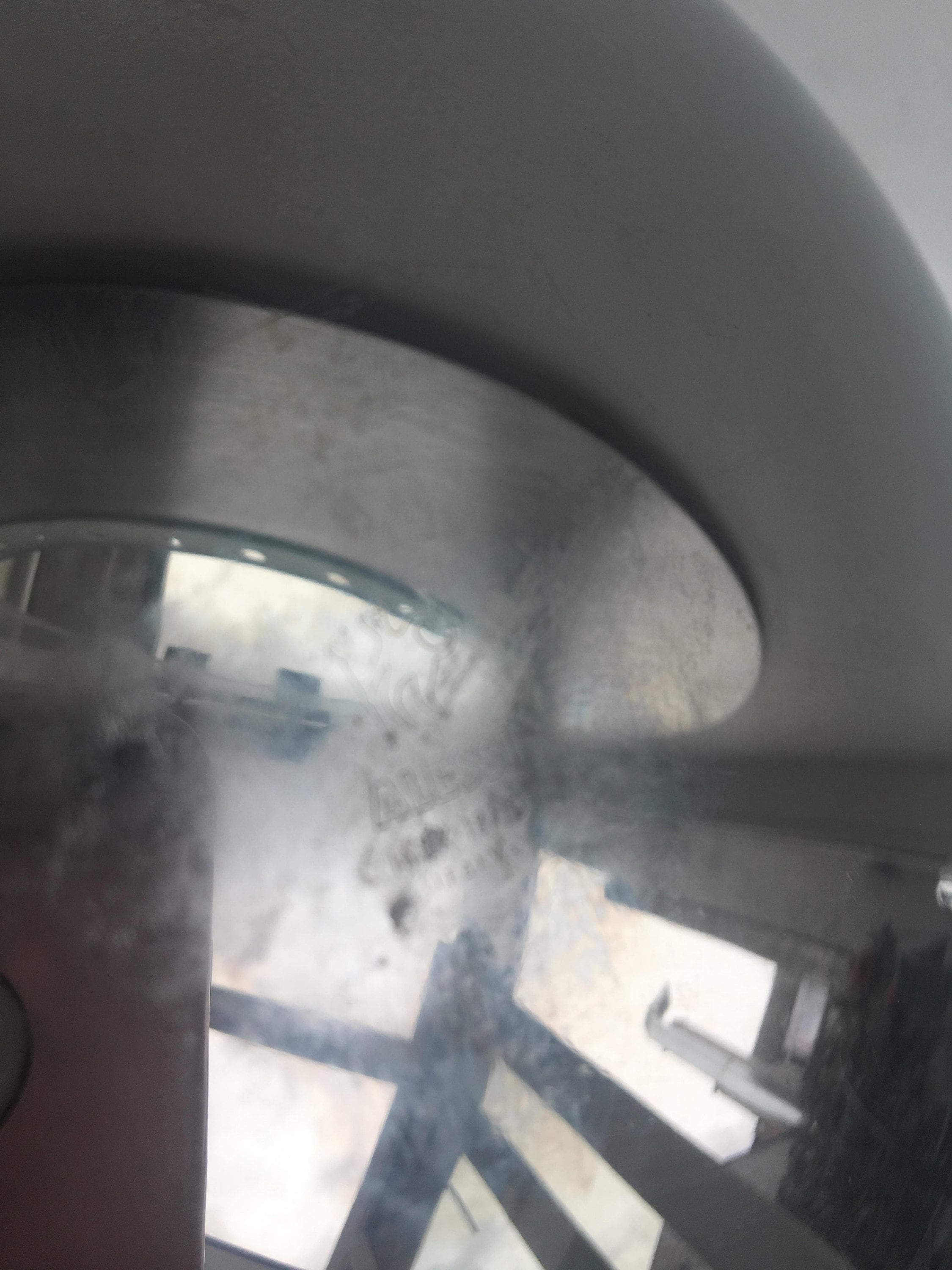 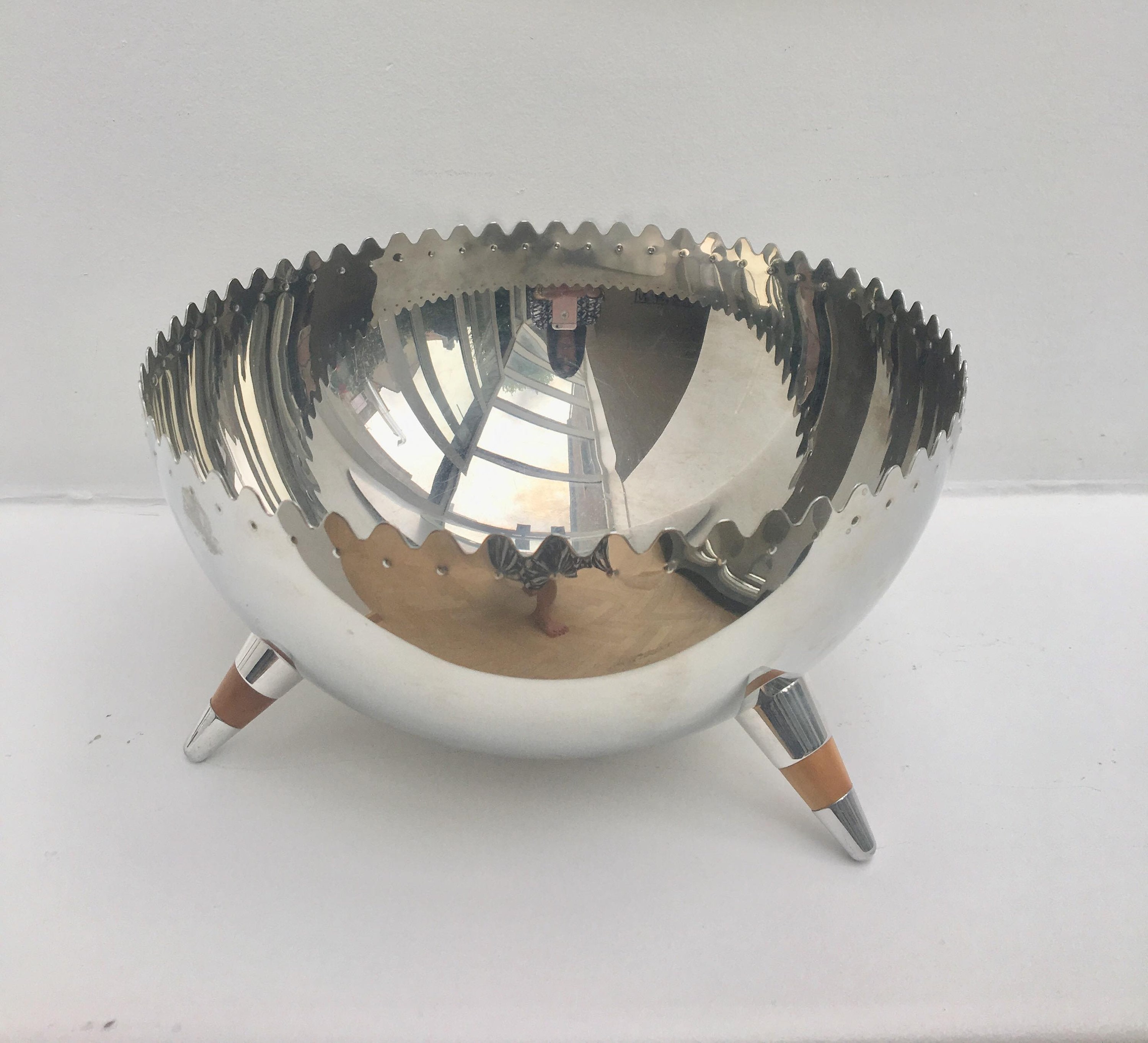 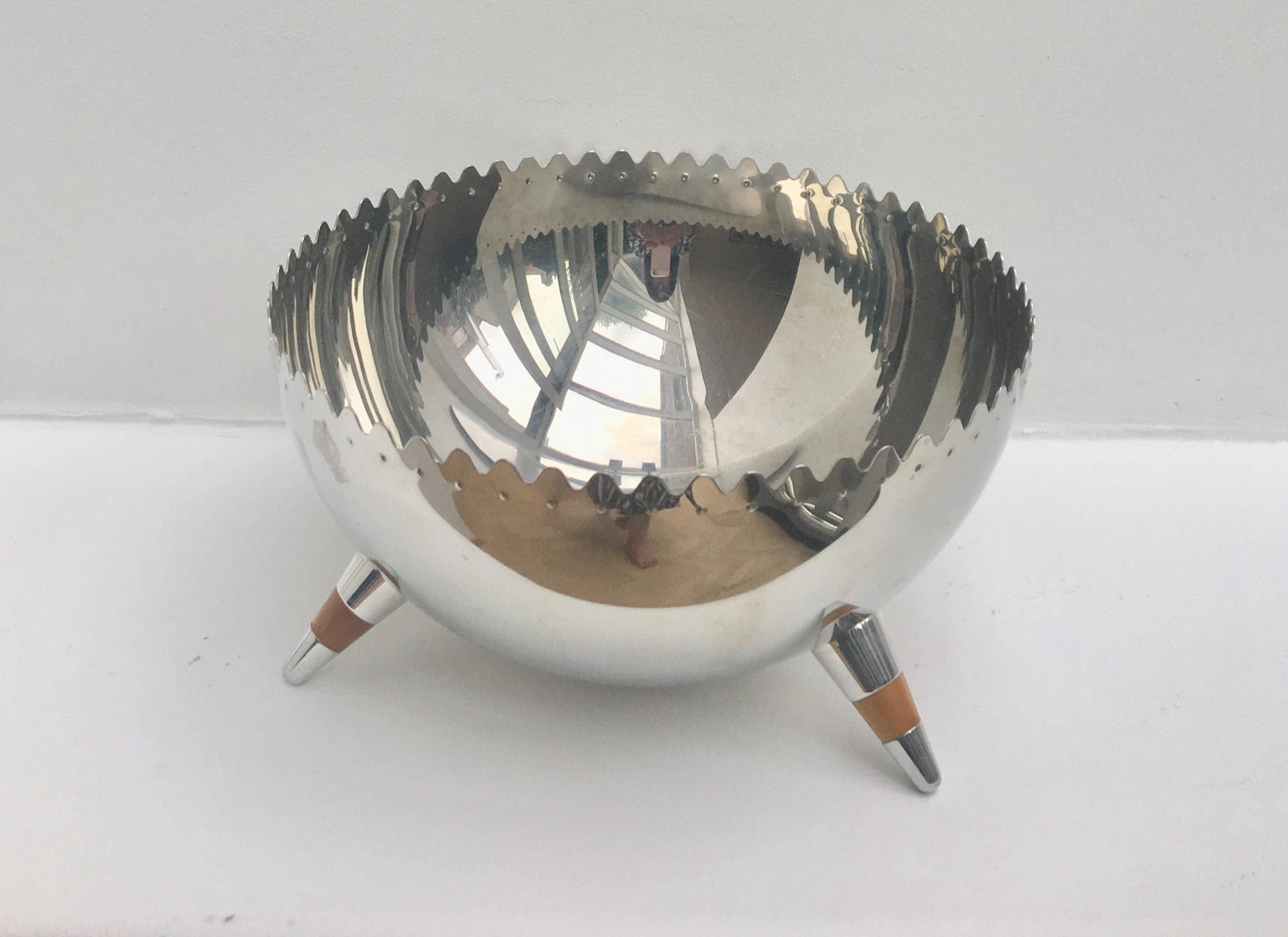 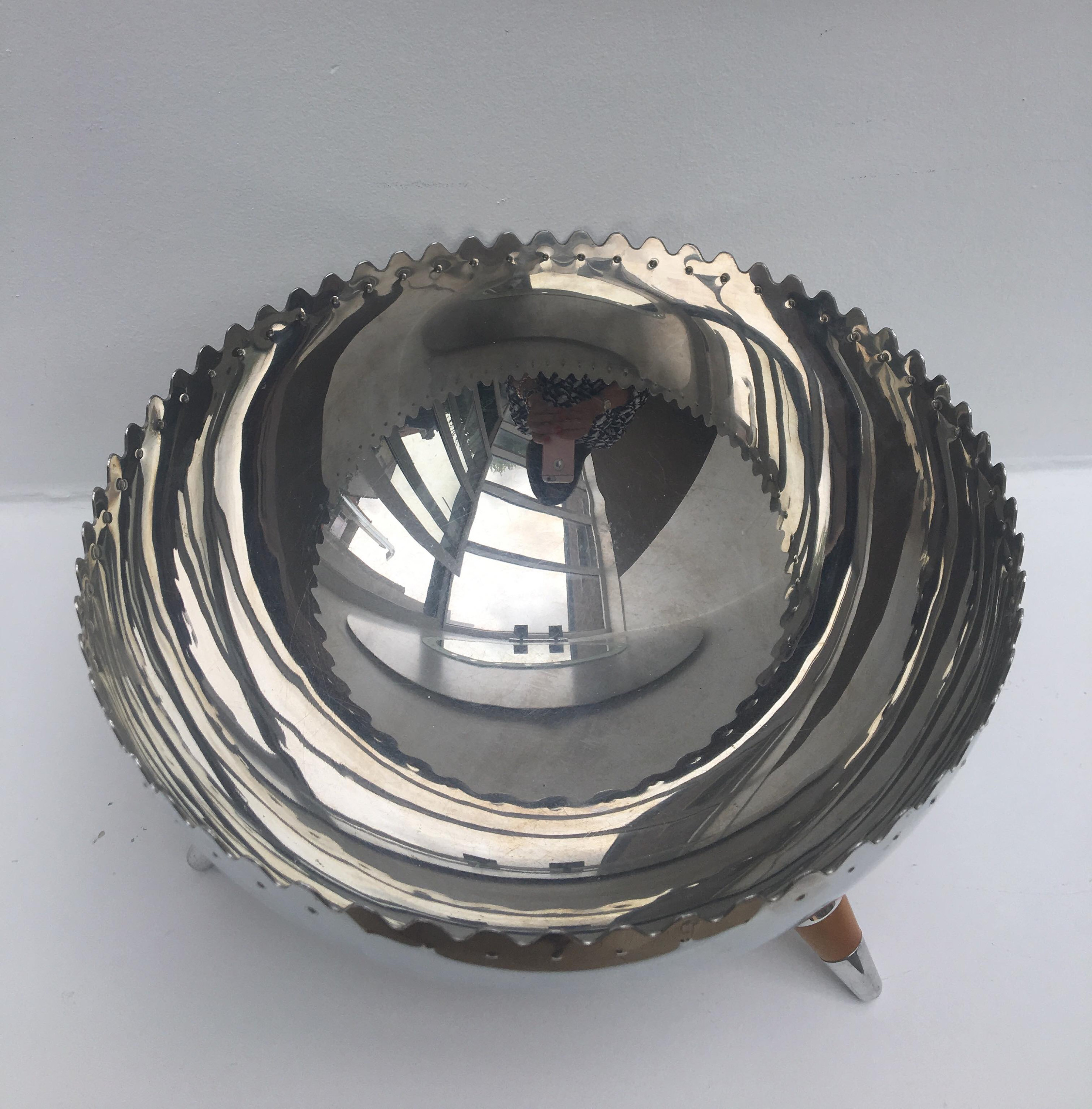 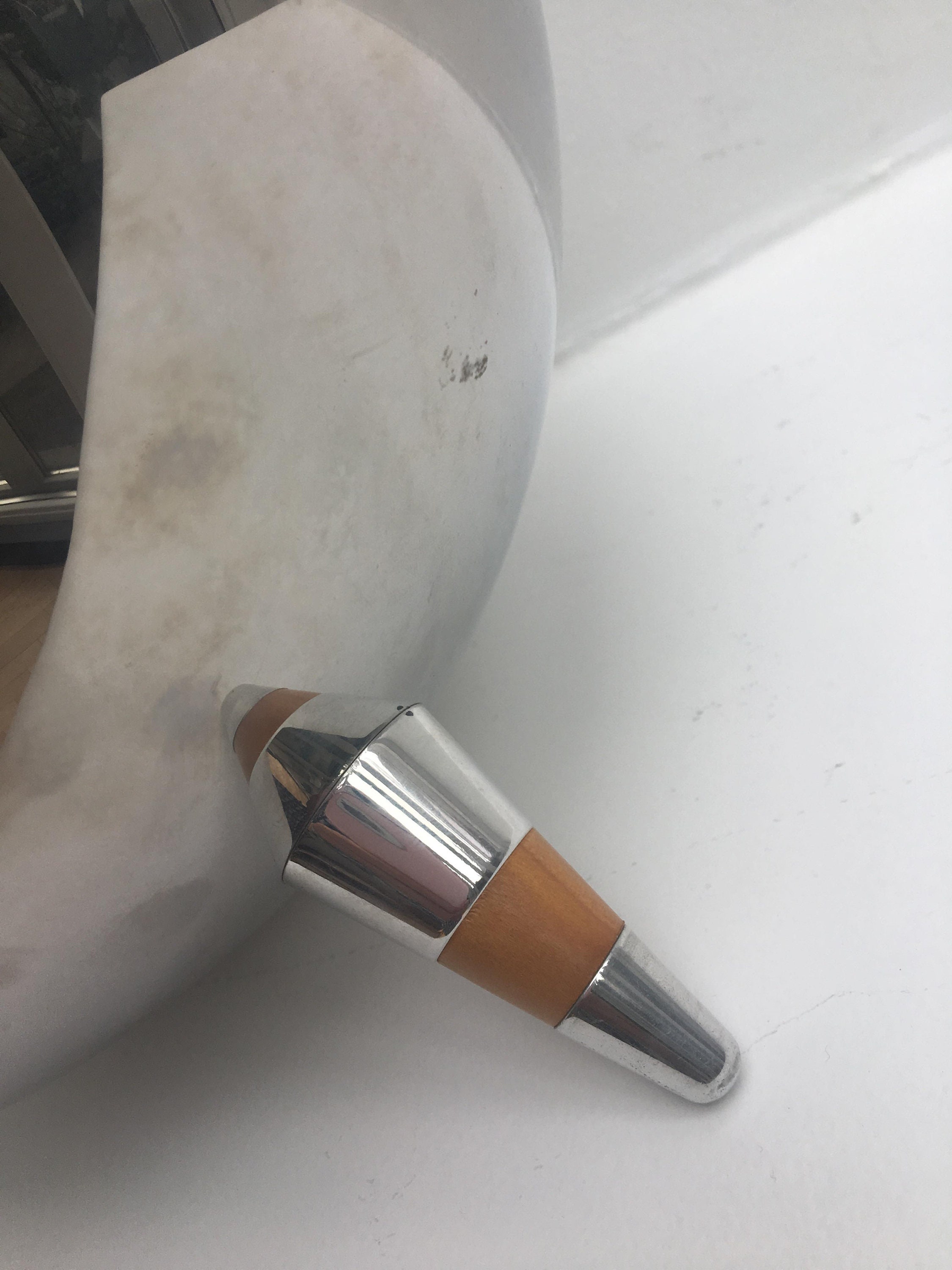 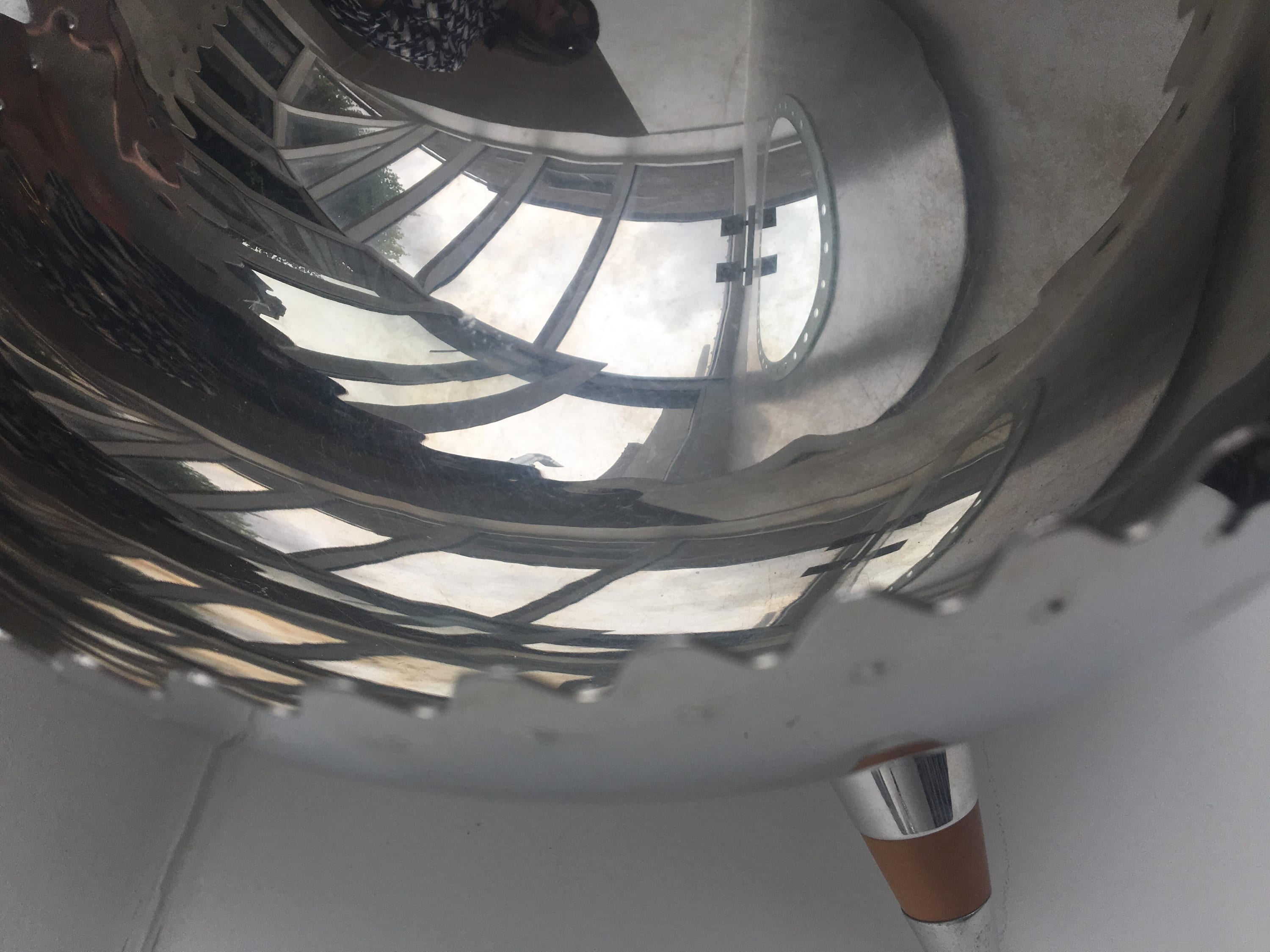 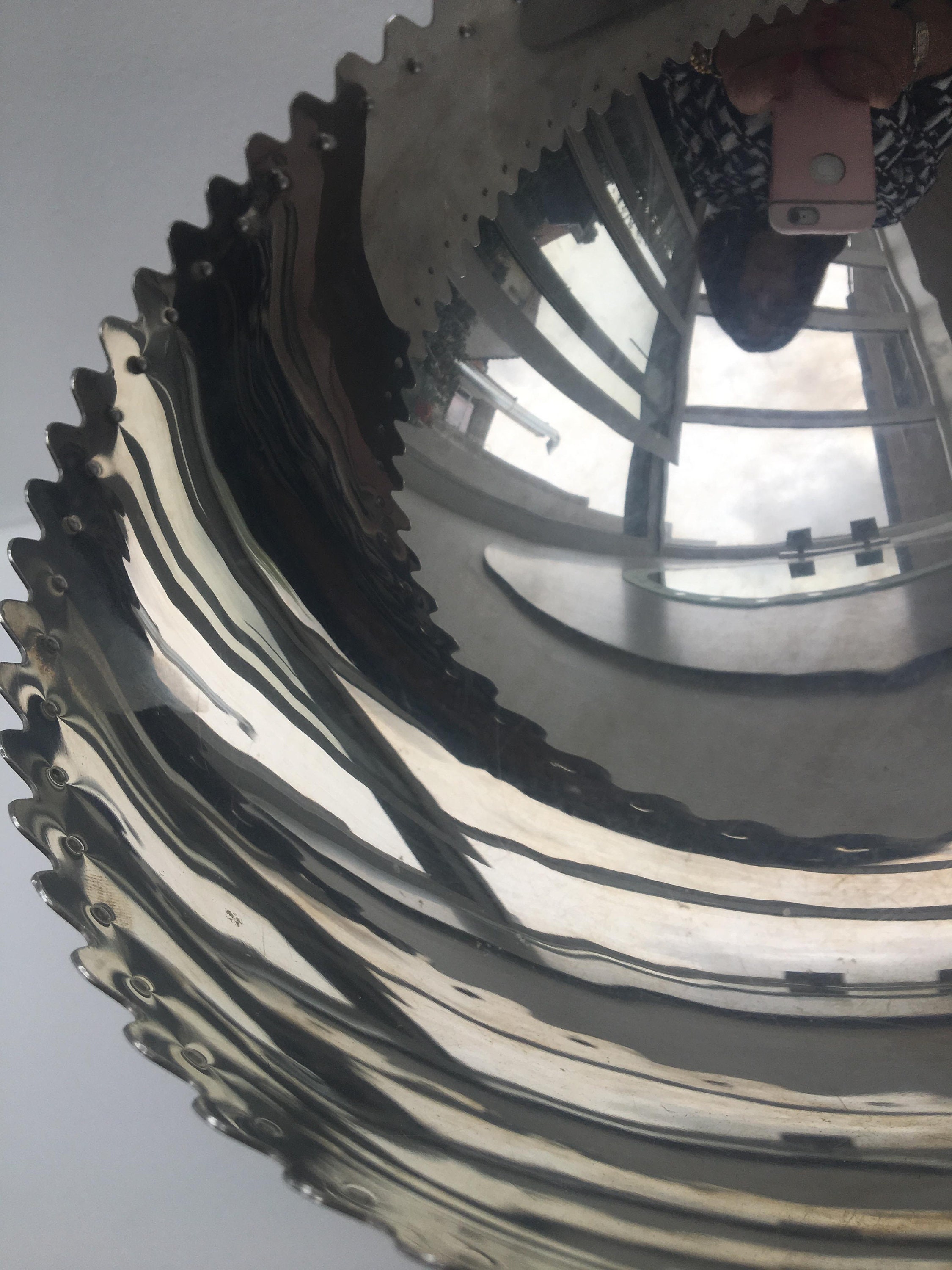 Alessi metal Chimu large bowl with wooden feet.
Perfect as Salade bowl or Pasta serving and also as a centerpiece or Fruit Bowlplate designed by Joanna Lyle for Alessi 1995-1999
Bowl, 'Chimu', stainless steel/ wood, designed by Joanna Lyle, made by Alessi, England/ Italy, 1992-1994. A hemispherical bowl made from polished stainless steel, supported on three small conical feet with wooden band inserts, and cut at the top to form a rim of a continuous, regular waving pattern just above a frieze of small globular protrusions, each ascending curve of the wave arching over one such 'dot'.
MarksMaker's mark, under base, stamp, image of a devil, "ALESSI / INOX 18/8 / ITALY"
Wonderful ALESSI Chimu Bowl JL01 by Joanna Lyle Mid Century Modern Footed Salad Bowl. This Bowl measures at 10 1/4" wide and 5 1/2" tall.
Inspired by the creations of the pre-Columbian Chimu culture, this bowl is designed by Joanna Lyle and made in mirror polished steel with aluminium and wooden feet. cl 350| 3 qt 24oz, Made in Italy

This bowl is an example of Alessi’s most interesting products of the 1990s. Being designed by a young English (?) designer, it also illustrates a significant change in approach to ‘guest’ designers at the firm at the time. During the last decade of the 20th century, Alessi decided to target young international designers, as opposed to those well-known or famous. Joanna Lyle was one of 200 young (under 30 years old) women who were commissioned to provide designs for the firm (for further information about the project refer to the ‘designed’ section). Lyle’s ‘Chimu’ bowl is an excellent example of objects produced as part of the project. Its simple yet striking form well complements Susan Cohn’s bowl also commissioned by Alessi at the time and also in this museum’s collection.

This 3 Footed bowl is in great condition with some very light wear and will display very nicely as well as it will make a great center piece.
"Designed by Joanna Lyle for Alessi, 1992-4. Part of the 1991-1994 Centro de Studi Alessi project (Alessi Research project) that focussed on cooperation with young (under 30 years old) women designers. The Chimu bowl was one of the first objects to be made as part of the project. The series was named by Alessi as 'Memory containers' in reference to the brief sent to selected international designers which asked them to explore "the archetypes of presentation and 'offering' of food and its rituals. Designers could draw on their own cultural heritage and personal experiences and were asked 'to abandon, as far as possible, the existing stylistic languages..."(A.Alessi. The Design factory, 1998, p.125). Alessi's objective was 'the realisation of a 'Creole project', a test-tube cloning of that which, given its natural span, happens much more slowly when different cultures come together"( A.Alessi, 'The Dream Factory, Alessi since 1921', 1998, p.98)."